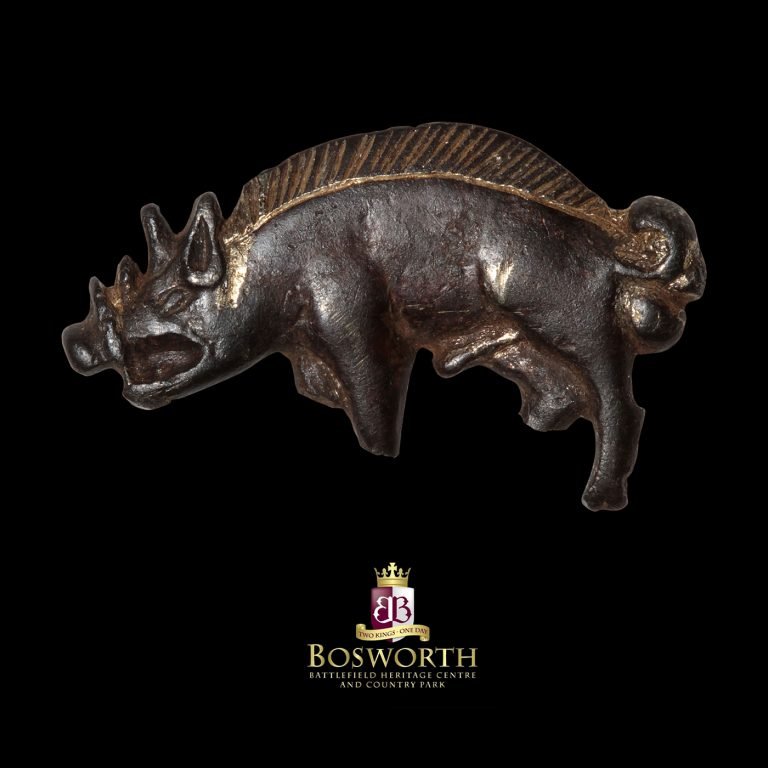 In 1996 two of the founding members of AHARG, Carl and Pete – both experienced metal detectorists, were contacted by Leicestershire County Council Archaeology Department and asked to search 10 areas that had been randomly picked. In these early stages of the project, all 10 grids were located in the vicinity of the current Battle Centre. Their task; to look for and hopefully find evidence of the 1485 battle. This initial survey was undertaken by setting out each search area of 100m2 and systematically searching these for finds in a methodical manner with maximum coverage.

In 2001, Richard, a third founding member, set up a volunteer team of field-walkers to see if there was any evidence of pottery scatters, again, immediately around the vicinity of the current Battle Centre. This was undertaken on a 20 meter transect method.

To be fair – in those early days – nothing conclusive was found!

In 2002 the metal detecting team expanded and were brought in to join the fieldwalking team. Both disciplines worked alongside each other, using the same transect approach. However, this proved difficult to manage as the field-walkers covered the ground at a very different speed to the detectorists.

So, in 2003, having now formally set up the AHARG team, the decision was made to separate the two aspects of the research group. The metal detectorists work at their own pace and moved to a more random search method to try and identify potential areas that may lead us to the battle.

In 2004 Leicestershire County Council (LCC) commissioned a reassessment of the site of the battle, this was used as the basis for part of a Heritage Lottery grant application.

In 2005 LCC was awarded a grant and a formal agreement between LCC and The Battlefields Trust was drawn up. Dr Glenn Foard was tasked to lead a multidisciplinary project and try to find the true site of the Battle of Bosworth. AHARG, being already familiar with the area and having by now collated a lot of data for where the battle didn’t happen, were asked to lead the metal detecting part of the project.

Early on during the project, a methodology for systematic detecting was established as the only way to understand the distribution of finds across a wide landscape. The transect distance started at 10 meter intervals to cover as large an area possible in an attempt to find a battle ‘hot-spot’. It quickly became apparent that we were not getting enough coverage of a field, so this was moved down to 5 meters. Finally, once we had started finding possible battle evidence, the transects were closed down even further to 2.5 meter maximise coverage, this we have found, to be the optimum distance.

In October 2009 the project made world news when it was announced to the public that part of the site of the Battle of Bosworth had finally been found.

Between 2005 and 2010 the detectorists had found 108 confirmed battle finds; in doing so, the team had walked the equivalent distance of a hike from Bosworth to Gibraltar and were on their return journey – over 1200 miles!

Though the HLF project finished in 2010, AHARG have continued their work at Bosworth. Not content with just finding the site of the battle, they have also recovered evidence for Richard’s camp, Henry’s camp and possibly even part of the final rout.

We are proud to have played our part in recovering solid and proven evidence of one of the most important events in British history, by answering a long asked question that has been debated for many years, and hopefully reigniting peoples’ interest in this turbulent and bloody part of the UK’s past.

To date, more fired roundshot have been recovered at Bosworth than, collectively, from all the rest of the European medieval battle sites.

Along with that we have

The Battle Of Bosworth

A selection of the finds we recovered during the Bosworth Battlefield Survey. 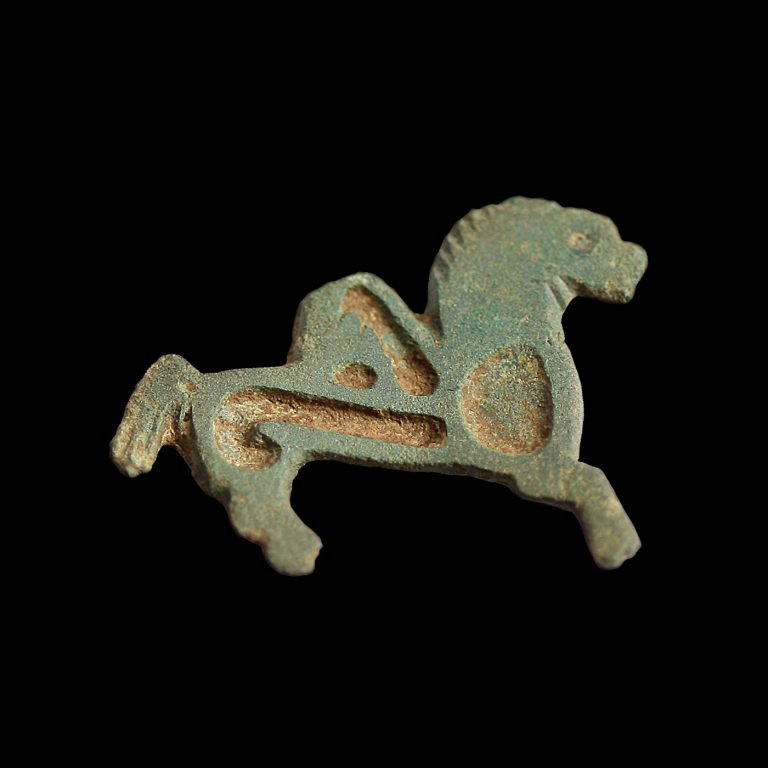 1 of 98 Roman horse and rider brooches found by AHARG

In the autumn of 1999, a fieldwalking exercise involving three of the founding members of AHARG was carried out on a 30 acre field.

A distinct pattern of Roman pot was found, along with a certain amount of earlier worked flint and later period pot sherds.

Over the following 8 to 10 years the team systematically detected the field, and a stunning picture has slowly begun to emerge.

The field has yielded a number of finds.

4 Crossbow Brooches – 1 of which is silvered.

All finds were reported to the local PAS Finds Liaison Officer and are now part of the Leicestershire County Council Museums Collection.

Of the 153 plate brooches that have been found – 1 type of brooch stands out from them all.

The Roman horse and rider type.

186 horse and rider plate brooches are known nationally. Of those we have found a staggering 98. Leaving a further 88 recorded from as far south as the Isle of Wight and as far north as Darlington; from Chester in the west to Norfolk in the east.

The next largest collection of this specific brooch is 10.

Following the work undertaken by AHARG on this site, a team from the University of Leicester along with members of the British Museum undertook a couple of small excavations in August 2013. This included putting in a trench across a circular anomaly picked up on a geophysical survey that had been carried out some years before. The feature turned out to be the remains of a circular stone wall. The experts have concluded it was originally a small temple – possibly with a manufacturing site nearby.

A selection of the Roman horse and rider brooches we recovered during the Roman Temple surveys. 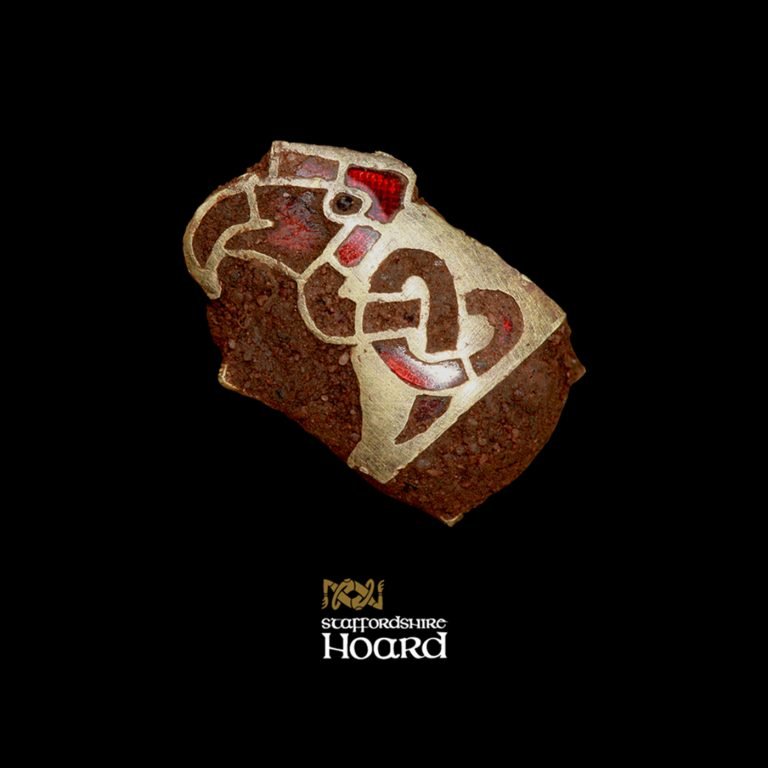 In November 2012 AHARG were tasked with conducting a 5 day survey over the site of the Staffordshire Saxon Gold Hoard which was originally discovered by metal detectorist Terry Herbert in 2009. The Staffordshire Hoard is the largest hoard of Anglo-Saxon gold and silver metalwork yet found. It consists of over 3,500 items, amounting to a total of 5.1 kg of gold, 1.4 kg of silver and some 3,500 pieces of garnet cloisonné jewellery.

The survey was commissioned by Archaeology Warwickshire for Birmingham Museum and lead by archaeologists Bryn Gethin, Rob Jones and Sam Wilson. The brief was to systematically survey the whole of the field at 2.5 metre transects and recover any associated metal finds that may have been missed during the original archaeological excavation and additionally, to identify any other archaeology that may have been connected to the find. This would be the first time the entire site had been surveyed in this way.

We were not expecting to discover much, if anything, as the site had been thoroughly excavated and searched with metal detectors in 2009. To everyone’s surprise, we discovered over 100 new items from the hoard including the second gold cheek guard from the helmet which was thought to have been missing from the original hoard deposit – this discovery certainly turned some heads.

Additional new finds discovered during the survey included; a gold cross with a mounted garnet jewel, gold and garnet fittings, gold and garnet bird of prey, a gold horse head mount, a number of gold rectangular plaques decorated with intertwined snakes, gold studs and many fragments of gold foil with embossed decoration (these are thought to be from the helmet).

The AHARG team were later invited to visit the conservation labs at the Birmingham Museum for a tour and to see the finds in more detail as they were being cleaned and catalogued before going on display.

We are proud and honoured to have played our small part in adding to this truly amazing historic discovery.

A few of the finds we recovered during the Staffordshire Hoard survey.